Skip to content
Update – Here’s the trek route (I only went till Sandakphu and then climbed down to Rimbick via Shirikhola, while this route goes all the way till Phalut. To see the full details of the route, click on the link to tripnaksha at the bottom right corner.)

Apologize for the long delay in the post about the trek itself. Unlike my previous post, this one will hopefully not be excruciatingly long. Mostly because of the weather. As I’d said earlier, I was doing the trek at the end of the tourist season – I started on 10th of June and the Singalila National park is closed for tourists from the 14th. One of the reasons for closing the park is that the great views of the Himalayan ranges aren’t available in this season. The rains come down in full force and even when it is not raining, the clouds obscure all views. I started with a hope of getting a view, but prepared myself mentally in case I didn’t.

Day 1 –
Peter (my guide) and I started quite late – at about 7am (considering that it gets bright at 5am, 7am is late). However, there wasn’t much walking to be done on the first day – just about 10km. The climb from Maneybhanjung to Chittrey is quite a challenge. The path is very steep and the altitude is an additional challenge. I had left my sleeping bag and tent behind at Peter’s home so the backpack was lighter by about 4.5-5Kgs. Even without this, the rest of my stuff wasn’t very light – my backpack must have easily weighed nearly 12Kgs. At Chittrey, we stopped at a small Monastery. Unlike the ones I had been to in the north-east, this one was almost empty – didn’t see any monks at all. 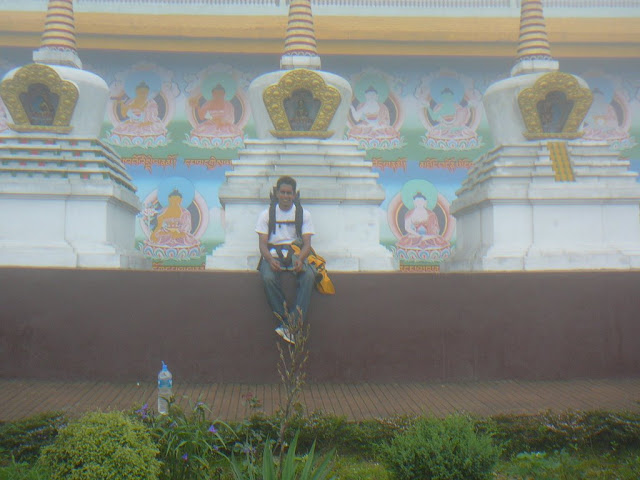 The breakfast of wai-wai (Nepali instant noodles) was hardly enough, but it was time to go. All along the way, Peter kept pointing out some of the shrubs used for treating different ailments. Of course, I don’t remember any of those now, except that most were supposed to treat digestive problems – wonder if there was any special reason for that. Anyway, the way to Tumling (our destination for Day 1) was marked with small quaint villages and a few army posts/camps. The interesting part was that we were crisscrossing the Indo-Nepal border many times – I found out later that we would do this would continue later too. We got to Tumling by lunch time after walking for about 3.5hrs. The landscapes at Tumling were enchanting, grabbed a quick lunch and then shot some pictures. I had to complete a couple of articles for the hitchhiking blog and worked on that for some time but was so tired that slept off real soon. 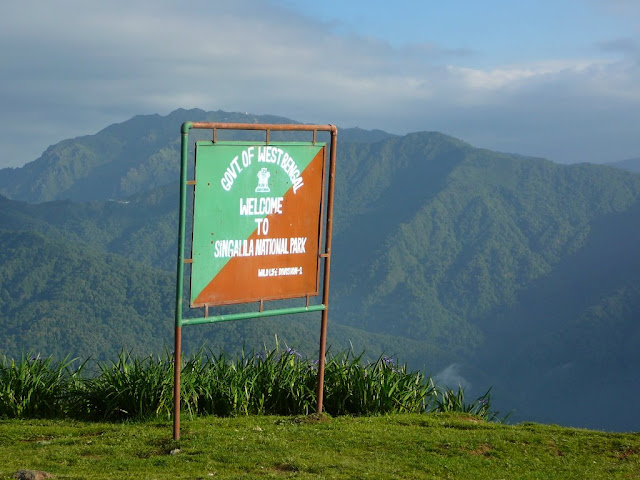 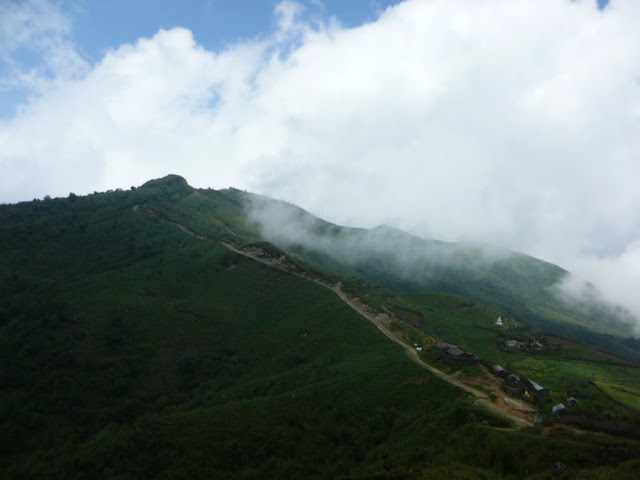 At Tumling
I woke up to some commotion and saw that there were some more tourists outside! And all I was thinking of was I would’ve saved some money if I’d met these guys before starting :P. I chatted with the boys (there was a girl to in their group but she was too tired and went to bed early) after dinner and found out that they were on a world tour and had started with India. One of them had recently done the London marathon and in great time too (4hr 17min)! Well, lucky for them that they were able to save enough for an year of traveling after working for just one year back in London.
Day 2 –
Woke up early to find that a ridge of the Kanchendzonga and the Sandakphu peak were visible. I was pretty happy that I could see at least some of the peaks. The earlier plan was that we would stop at Kalapokhri and climb to Sandakphu the next day. But decided later that we would try to get to the peak on the same day – a hike of about 20km. The last stretch of 4km from Bhikeybhanjung to the peak was supposed to be really steep and that was a concern. The start of the day’s hike was quite good – the path was quite flat, idyllic villages and gorgeous landscapes all around. I even got to charge my netbook at a store in one of the Nepali villages (Tumling did not have electricity). 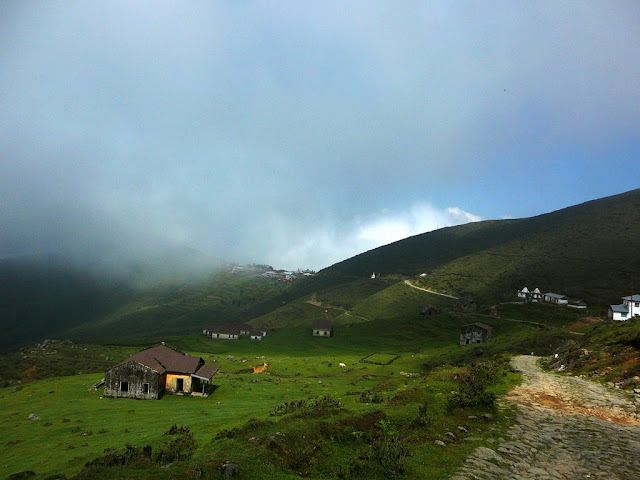 There was an old Landrover being repaired in that village and guess what they used to pump air into the tyre – a bicycle pump! And, the most amazing part was that a 70 year old was working the pump! He did a funny little dance after he was done pumping the tire too. The hill people have so much stamina that it’ll most people from the plains to shame. Even Peter smoked quite a few cigarettes and he wouldn’t lose a breath walking up the hills. Peter had also said something profound earlier – The people from the North (of India) make money by talking fast, the people from the South by thinking fast and the people of the hills by working hard. Quite true, I must say.
On the way to the National park, we were stopped at an army camp and were asked what we were doing and so on. The jawans there took interest in the GPS I was carrying too and when I said my name, called another jawan from A.P who was a Reddy too. We made quick progress this day – mostly because there were no views and we were walking in the jungle. One important fact about this trek is that there is a (barely) motorable road right to the peak – it is very rocky and unless your vehicle is heavy enough, you would be bounced around pretty hard. It would definitely be better to walk instead of driving, although walking isn’t very easy either as you have to be careful walking on the rocks. I used up a couple of the energy gel packs Ammi had given me in Hyderabad and although my legs were not tired, I was losing breath quite a few times. The last steep stretch just killed me – the road is extremely steep – but the view of the road we had left behind was breathtaking! 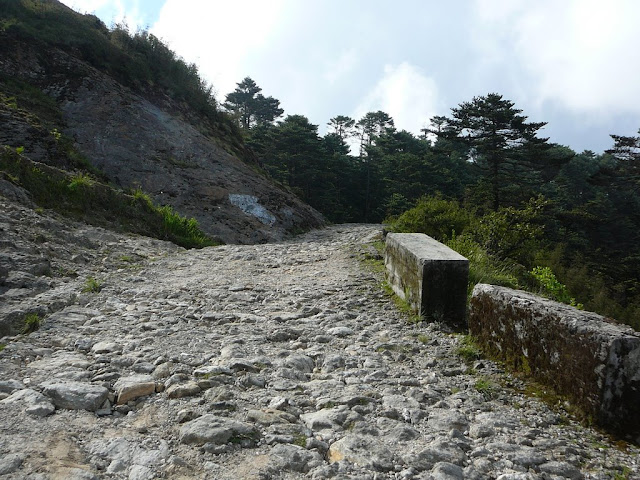 The final climb before Sandakphu peak
On reaching the peak, my joy knew no bounds – finally! The next task was to negotiate for reasonable accommodation – I was able to get it at one of the private cottages for Rs.100 again :). Undressed and went to bed immediately – with the cold weather and warm rajais wrapped around, what else would I do? The guide with the British tourists came over and woke me up – I was pretty happy to see him, Peter and I were contemplating if their group had turned back as we did not meet them anywhere on the way (we had left Tumling before them and were faster).
The evening was spent watching the opening football match of the world cup and charging my netbook again (here we had to pay as the cottage used a generator for the electricity).
Day 3 –
The previous night, I had asked one of the guides when I would have to wake up in order to catch the sunrise (4.45am) – very optimistic question as it had been extremely foggy in the evening and there was no telling if it would clear up. Also, I had watched a movie late into the night and had not even put an alarm before going to bed. Somehow, I did wake up at 4.30am and looked out the window – I could see some mountains and could make out the sleeping Budha – the Kanchendzonga range! Ran out and clicked some pictures. 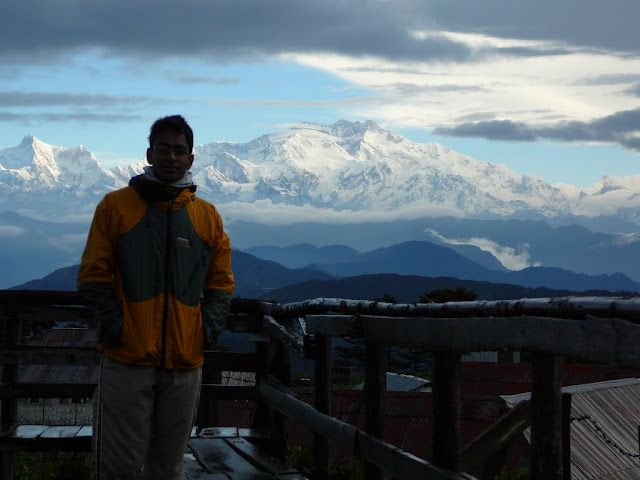 The sun had risen and as I looked around, I could see a lot more peaks. I had read somewhere that the only way to tell Mt. Everest was that the rays of sun fall on it before any other peak, and there in the distance I could see it! This was the only time when I regretted having just a P&S camera, couldn’t get great pictures of the Everest. But hey, trekking at the end of the season, not even knowing why the trek was famous for and then being able to see mountain ranges from Himachal till Sikkim is more than anyone can ask for. 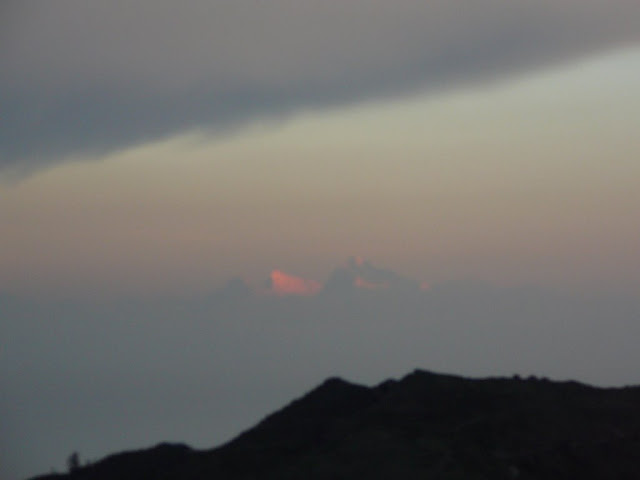 Sunrise at Mt. Everest
After breakfast, it was to move on. I got to know of Peter’s special skill as a great fisherman and had requested him to stop at Shirikhola, a small village by a river. The trek path this day was all trail, unlike the previous two days when we walked on a road. Since Peter had some confidence in my fitness, we made even faster progress as it was all downhill. The previous two days, I was losing breath but this day my legs were pounded to pulp. Climbing downhill is definitely harder than up. We got to Shirikhola early in the afternoon and got to the river soon. Peter made catching fish look easy and I actually felt that collecting worms for the bait was harder. I tried my hand at fishing too and managed to catch one! I got to know later from Suzu in Kalimpong that fishing is considered a sin by Budhists. They believe in reincarnation and fish is one of the last forms before reaching nirvana, go figure. I will keep this in mind. Our dinner that night consisted of the fish we caught from the river (I had turned a vegetarian for nearly two years and had started eating meat again a couple of months back). 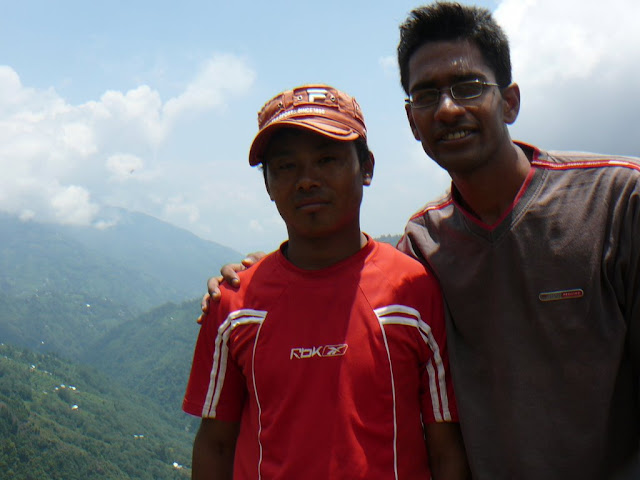 With Peter bhai, my guide on the trek 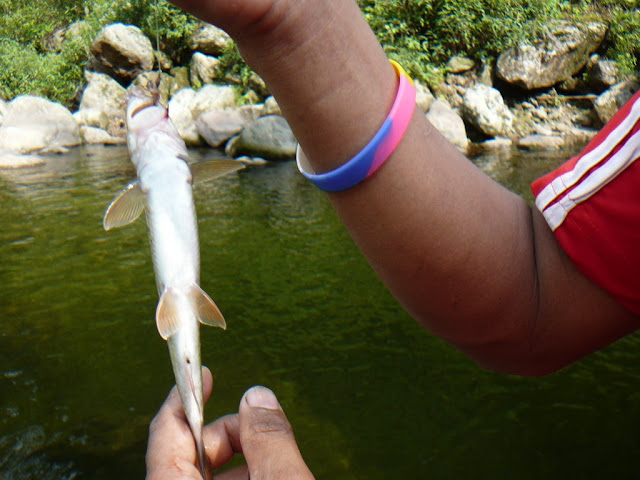 The first fish I caught myself
Day 4 –
Our final stop before I got back to Darjeeling was Rimbick, a walk of about 6km from Shirikhola. 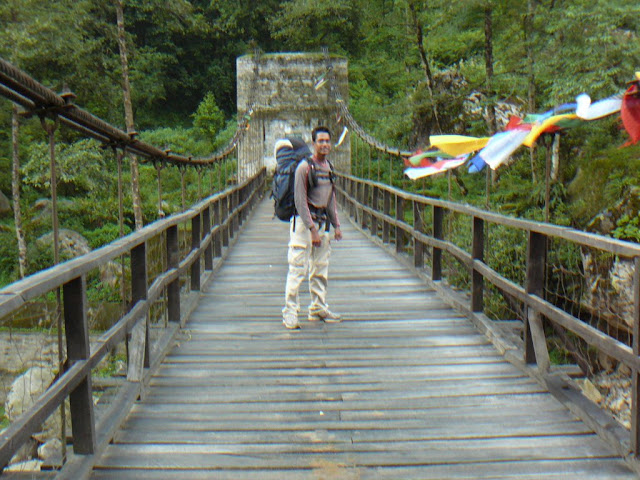 It was a very easy walk compared to the earlier days. But my legs felt like rubber from all the running downhill the previous day. We reached in time to catch the 7.30am taxi to Darjeeling. Got the last seat though and had the worst ride of the entire trip that day. The seats were sideways and there were so many people inside that there was no place to move.

Reached Darjeeling in bad shape and immediately went to the Coffee Day to get better :P. Next stop – Kalimpong!