Skip to content
Prologue:
So I was done with my month long Hitchhiking trip in the north east and didn’t want to come back home right then. And, did not have a plan to do anything either. I was lucky to be able to attend Biswa’s wedding in Guwahati at the end of the trip and was hoping I could get some ideas when I met some old friends from college. And, that is what happened. Suzu had taken leave from work to attend the wedding and then spend some time with his parents in Darjeeling. He invited me over and there, I had a plan! However, his mom had to leave for Gangtok instead later, so Suzu had gone back to work in Kalimpong. I had made up my mind about going to Darjeeling so I thought I’ll do the Sandakphu trek which starts nearby. I’d seen pictures of the peak on a friend’s album and did not want to let go of an opportunity. Here’s what transpired after that thought.
Day 0:
I’m in Darjeeling and do not know much on how to proceed with the trek. Whatever I know is from Indiamike and I have learned that Gorkhey is a very beautiful place on the trek route. Just before getting to Darjeeling, I booked the Youth hostel. I was not very happy though because they did not have a dorm and I would have to pay for a 2-bed room (Rs.300 moreover!). So I picked a random road and started walking. Since I still had the netbook with me, I thought I should research some more before checking into the room. Asked a couple of people for a coffee shop and was pleasantly surprised when I was directed to a Coffee Day. Had coffee after a long time while checking some more on Indiamike about the trek. Talked to Mastarji who is a reputed trek organizer and whose phone # i’d got from the couchsurfer i’d stayed with in Siliguri. He suggested I should stay over in Maneybhanjung (base for the trek) instead of staying over in Darjeeling. Seemed like a good plan – smaller town, lesser amount to pay for rent. I was concerned about one thing though – taking a guide is compulsory on the trek. I had to get a good windcheater too, so went shopping for it. After some hard bargaining, got the one I liked at not too high a price. Explained to the shopkeeper what I was doing and he was of the opinion that a guide is not needed at all, I could just hike by myself – now that was encouraging. Caught the next shared taxi and off I went to Maneybhanjung.
After an hour’s ride in the taxi, I get down in a fog covered and damp Maneybhanjung. One guy at the stop asks where I want to go and it’s quite clear that I am going to the trek. He says (almost orders!) me to take a guide from the union and go. I tell him that I already have spoken to Masterji and the taxi driver takes me to him. So, no escape from the compulsory guide, eh.
Jeevan Sir or Masterji is a nice person to talk to. He used to head the YHAI treks to the Sandakphu peak earlier and is a very good source of information. I was wondering if I could cool my heels in Maneybhanjung for a day and see if I could join any other trekkers on their way to the peak – besides having company, I would be able to split the guide charges. However, Masterji dismissed the idea outright as it was end of season (just 5 days left for the Singalila national park to close) and there had been some political disturbance until a few days ago, so there was no chance of any more tourists. He asked a guide cum porter to come and meet me up and arranged for a charge a little less than the union rates. Guide (Mr. Peter Rai) and I took a short walk in the small town and talked a little bit. We even went to the Nepal border. 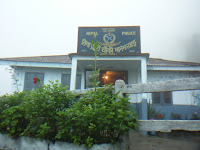 It was decided that we would leave at 7am next morning. The three of us (Masterji, Peter bhai and me) sat down for some time and went over the route details. I wanted to complete the entire circuit maneybhanjung-kalapokhari-sandakphu-falut-gorkhey-shirikhola-rimbick. This, if done in the normal fashion would take 6 days (as I had read earlier). The money i’d withdrawn earlier in Darjeeling would be just about sufficient for this. 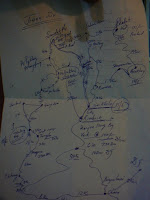 Dinner was with Masterji at the hotel downstairs from his dorm. He explained the names of each waypoints on the trek route and we discussed a little bit of local politics too (yeah it’s usually better not to talk politics but if done in the right way, can be a great icebreaker). He asked me a question for which I had no answer – what was the Sandakphu trek famous for? I had only heard of a good trek and that is what I was looking for. But, he told me that of the 5 tallest peaks in the world, you can view 4 of them from Sandakphu on a clear day! Considering the way the weather was in Maney, I was wondering if I would be able to see the next 10m even. That was something I would only know when I got to the peak. 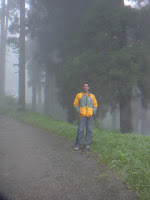