Skip to content
So I did my first official Half Marathon. My timing was ok for a first timer, but I SO wanted to finish in under 2hrs. I totally underestimated the humidity and was tired right at the end of the first km itself. Nevermind, I’m still sticking with my aim of finishing a full marathon before the end of this in under 4hrs (I know it’s kinda hard, but there wouldn’t be a point in doing something easy right?). Have to start training for this too. 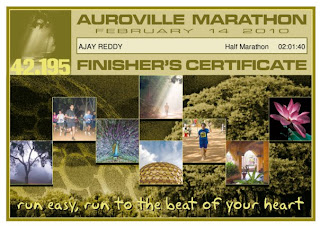 I missed running with Vasu (a Hyderabad Runner who ran the full here), who I take as my pace mate. However, I compensated by running along a couple of foreigners, but couldn’t keep up with them after the 13km mark. I started walking for about a km after 19km. Another thing I differently here was that I ate bananas/biscuits and drank at every water point. It was so beautiful along the trail – woods all around and beautiful houses – I wanted to keep looking around, but since it was a trail, I had to watch where I put my foot too. After the run, I got to soak my feet in water and a foot massage from one of the volunteers there – I’m telling you, these guys sure know how to make you feel like a rockstar. I guess that is why runners keep coming to Auroville although there is no prize money.
Before the weekend run, I hiked along the train tracks to Dudhsagar. I took a midnight train from Dharwad, got down at Castlerock and slept in the station master’s office (yeah you won’t prolly get a chance to do that – my dad knew the SM there). I started walking at about 7am and got to the waterfall at about 11am. Although there wasn’t much water in the waterfall, I was able to get down to the small pool at the bottom of the second stage of the waterfall (thanks to the tip from Manoj, a pointsman at Karanzol). I was quite surprised to see that most of the tourists there were Russians. Spent a lazy afternoon reading at the empty observation point at the first stage of the fall and took the train back to Dharwad in the evening.
Last weekend, I went on a hike in the Tadikalpudi range near Bhadrachalam with CTC. The hike was moderately hard, and I would’ve enjoyed it even more if the trees were a little greener – summer has come early again this year and it was quite hard carrying all the water with us. I shouldn’t have worn my running shoes though, a part of the sole is damaged now. Will buy army canvas shoes next time as advised the trek leader. Seems they cost about Rs. 200 and you get them in some shops near Karkhana and Tirumalgherry. BTW, the treks are all up o n TripNaksha already, check them out.
This wednesday I flew to Trivandrum to attend Srikanth’s brother’s wedding. It was an extremely short trip – I flew back to Hyd just the next day. Met up with Ajesh too, another friend from college. I ate like crazy and the humidity killed me, again!
Don’t have any more travel planned till next month, but then I’m not very good at making plans, right :).