Sometimes, rather many a time, we curse the situation we are in. And we tend to ask – why me? Who we ask this question varies from person to person, but I’m sure everyone has such a moment. However, little do we realize that these WTF moments are what stay in your memory for a long time. With me, this is frequently true – as I have a brain which remembers things just as well as a sieve that holds water (in my dear friend Srikanth’s words). Normal memories just won’t stay, they have to be bigger than usual. I was packing today (I have to move after I come back from Dharwad) and came across an old diary (the only one which i’ve attempted to fill, and didn’t fill much anyway). And, I came across an entry of one such WTF moment which I still remember very well.
It was in September 2001 (the night of 22nd to be precise), I was in my 2nd year of engineering (I did Electrical Engineering at N.I.T, Jaipur), fresh out of ragging. I used to stay in the hostel, and that year I was in Hostel 6 (we moved every year). Now, our college had a huge campus – nearly 450 hectares and hostels are not very close by. Unlike most other N.I.Ts, the campus is also inside the city limits. Also, hostel 6 was the farthest from the admin and classrooms – meaning closest to the boundary – and the distance still was nearly half a kilometer. Beyond this boundary are some hills, stripped bare by quarrying. Here’s a view of the hill from hostel 5. 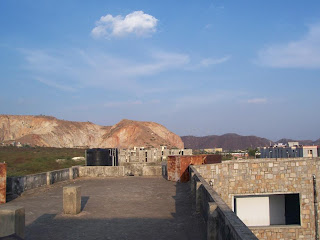 So, that fateful evening after dinner, I’m walking to my hostel and a couple of seniors catch up with me and ask if I’d be interested in joining them climbing up this hill. And I being the way I am, never say no. So, we made preparations (called other guys to join us), discussed grave issues (to take booze up the hill or not) and arranged for supplies (flashlights and just water finally). We were 15 people and it was 10pm by the time we started. Almost all of us were from KK group (Karnataka) and a couple of seniors had climbed up the hill before and said they knew the way. We climb wasn’t very hard, with steps going up part of the way.
Nothing eventful till we started back. In the dark, the seniors couldn’t find the way to climb down the hill. Somebody suggested a way back and in the absence of any better ideas, we started off that way. And climbing down was pretty steep, we were all slipping on the slippery limestone. A little way from solid ground, we heard loud voices shouting to us – “Hath upar karke neeche aa jao” (Raise your hands and climb down). We were all confused about what exactly was going on, and raising hands right then was definitely not possible – we were clinging to the rocks for support. Anyway, we did reach down safely – only to find quite a welcome party – a police canter (a light truck), personnel with megaphones and a lot of people gathered around (with lathis, iron rods and swords too). Now the police herded us all quickly into the vehicle and drove us away. Now, none of us could think straight at that point. The vehicle stopped beside a road somewhere and the police started asking us what we were doing up the hill. Only then we got to know how much anxiety we’d caused among people and the authorities. Seems many people had called up the police to report about the movement of ‘dacoits’. So the police deployed teams on 3 or 4 sides of the hill to nab them and one of these was our welcome party.
The police started taking our details, they were very happy that none of us was a Rajasthani. 2001, if you remember, was when 9/11 had happened and the U.S had attacked Afghanistan and Osama was all over the airwaves. One of the police officers was reprimanding us saying they were afraid it was Osama up that hill (well, we all know the Americans never did catch him, this must be this bright officer’s closest shave with Osama!). Our seniors started requesting the police to let us go. The guys in final year said we’ve got jobs and will lose them if you arrest us. The guys in 3rd year said we’re about to start with placements and won’t be allowed to attend interviews if you arrest us. What do we (a friend and I), still in 2nd say!! There were quite a few anxious moments. The police didn’t let us go then. They took us to the police station near Rajasthan university. Here the higher officer was a little more understanding (I don’t think they were going to charge us formally, only wanted to scare us), and offered to drop us ‘inside’ our college in the police vehicle. We were all petrified – we would be in trouble from our college people if we came in a police vehicle. Somehow we convinced him to just let us be and then started the long walk back to college. This is at about 2am and we were stopped again by police at the traffic intersection near our college. But this time, we had an iron alibi – we were at the police station right! Without getting into any more trouble, we all got back to our hostels at 3am.
But the story doesn’t end here. We all decided to go to Nahargarh fort the next morning while walking back. Got up at 5am and we did go there. Although the fort complex was closed, and though the seniors were CCing a couple of female batchmates who’d come with us, this was a fun trip (and my only one to Nahargarh, haven’t been able to go again unfortunately). Beautiful view of the city from the fort, Police close on our heels (3 people riding on a motorbike) and what not.
So, remember – today’s WTF moments are tomorrow’s grandchildren’s stories (if you get out of them w/o too much damage).
Here ends the longs story, be back next week after Kiran’s wedding reception at Dharwad.